Also, only two sine waves detuned against each other with a flanger on it doesn't warrant the need for a "tutorial."
Top

Worked on this reese for ~an hour...

Skip to around 40 seconds to hear it;

The concept is simple enough;
After constructing a basic reese in Harmor with a saw/square and unison, then lowpassing it, I fed it in to an EQ then a compressor. After that I added distortion via FL's default waveshaper. Lastly I added an instance of FL Love Philter with an envelope following bandstop (3x setting) and messed around with the cut/res/env settings.

Unrelated to the reese, for other reasons, I added ducking from the drums and some reverb.

Another way, instead of relying on the phasing from the unison/detune, is to add volume automation on the source synth. This render actually uses that method in addition to the phasing one. The problem with relying on phasing for modulation, is it is nearly impossible to sync with the BPM of the track.

Another thing I added in the signal path (this part is pretty arbitrary/optional), is a separate channel that splits away the lowest frequencies and reintroduces them after processing. I did this because it improves the clarity of the end result many times over than just feeding it all through the same path.
https://soundcloud.com/spacedtunes
Top

You have certainly improved since I was here last!
Nice one man.
https://soundcloud.com/spacedtunes
Top

You have certainly improved since I was here last!
Nice one man.

Thanks man, I really appreciate it! Got some good stuff coming this year! Unfortunately I'm unable to put any of it on SoundCloud due to NDAs and whatnot :'(
Top

I just try and look for some gritty wave forms, then just make sure all of it's restarted via the gate.

Scrapyard and AI are perfect in Massive. I made on in ES2 once but that was ages ago, think that might of included ring, iron and I think a saw(?) wave form with a crap tonne of distortion.

I think it's pretty important to always distort it a lot. An amp can work pretty well but that can separate it from the track if you're not careful. There's also a tut vid on YouTube about this vocal filter for growls. Really good technique and can work well with the filtering of a Reese bass if you're doing some KOANsound shiz. Hey mate, love the sounds at the start (and midpoint) of each bar. Could you point me in the direction of how to get there? How many parameters are being modulated and in what different ways?
Soundcloud
Top

Hello everybody. How would I go about getting "close" to the reese bass in this tune?

Low pass filter
Music is food for the mind, body, and soul. - IRL

R3b_Official wrote:Do any of you guys even put your reese's into songs or anything? Sorry ive been gone for awhile but imo the last couple threads honestly have been fart nosies. I like the attempts but everyones just posting random bass's to "out do" each other and the very few post are good tutorials on quality stuff. Big ups too those guy! Its not the same how it was a year ago.

Something needs too change on DSF

Ascenic wrote: As you can tell I get needlessly complicated when experimenting. Teaching myself how to neuro is hard.

Considering Ascenic's love for Noisia i figured i'd write this for him as well, because somewhere along the lines of Noisia i know he uses this method to a degree... Its not just about one bass...

its about ALL TEH BASSES... TOGETEHR.

I saw this and i thought i would pop in again. You guys hear at DSF hear from me every now and again and i made a post a couple pages back explaining how some of my stuff works and i think it got ignored by more people trying to outdo each other...

So here is round two.

Take a listen. I am going to be cocky by saying this specific formation of bass is something that a lot of people out there are seeking after. If the sound can be built it seems you guys struggle most with putting it in a composed form. And if it sounds generic to you?... well sorry and disregard the following paragraphs.

This is a bit of a longer preview of what i've been working on.
Besides a super saw, it is all reese bass and it is all using the same process.

(Side note: If you enjoyed the growling/snarly/coyote reese bass around 0:30, let me know and i shall teach you the ways of the wild.)

Simply put, its a reese that's been resampled 4 or 5 times manually through stock effects found in ableton.
Effects include:
- Saturation
- Phasing
- EQ Rolling (Basically Spiking your EQ and moving it up and down the spectrum really fast)
- Probably about 16 compressors later....

The really bouncy feeling comes from the phasing modulation.
And the almost "vinyl" effect comes from a certain J curve method i've been studying. Pretty much i wanted to give my reese bass the feeling that i had a turn table and was playing and i hurried and "scratched" it just a tiny bit just to get a little wiggle out of it.

Here is what the J curve looks like in pitch on the reese: 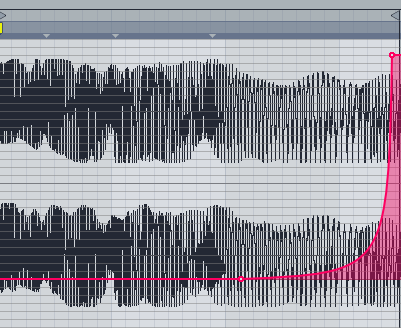 It basically is a saturated curve of volume rising at an exponential rate, and cut short at the tip of a wail to prevent any unharmonic issues, then reversed and faded into an entirely seperate module with multiple J curves running off of it and thus leading into the next clip and so forth to infinity...

Since i don't want my volume flapping around like a floppy weiner you keep the original samples so that you can keep the wails without effecting the actual volume of the sound. You're basically creating a duplicate envelope for the sound you already have.... in volume... for your new sound. I shall explain further after this picture. :3 These samples are sampled together very roughly by their own counterparts. So pretty much what i did is i isolated the two samples and compressed them and make them one sound. And as i resampled the so called "J Curve" became less prominent (which is good so you don't break peoples ears) but still remained the factor between the two samples.

And then i resampled countless times to produce a unique sound in here i like to call a handshake.

The sounds to start off with are very rough reflections of each other, but after the process is applied "X" amount of times the sound starts to "dither" together, as stated before. And it makes it so that the sound, as a whole, presents itself in a single wave formation, instead of a big mess of them, then you can take that sound again, and reproduce it to create the watery reese that everybody wants. Its all about the handshake.

Hope i helped!
A little tune of mine

You've given me a lot to experiment with!

bouncingfish wrote: AU like australia? I went to the site it uses paypal. They have paypal down under don't they? jhaha

Too bad this thread isnt more alive :/ in fact DSF isn't really as alive anymore, at least under sound production :c
A little tune of mine

It's sad really, in past there were like 10-20 posts per day for reese and growl threads. There was also Datsik, Burial, Skrillex, KTN, Excision, Knife Party, dungeon bass, low midrange + million other active threads. I'm still trying to figure out where did everybody go... Are they on some house forum now?
Top

I can tell ya...they're here. Just not really feeling it the way they used to, in an outward context. In some interview I saw/read (memory sucks), Jake (KTN) and Jon (Spor/feed me) were talking about how the novelty/mystery of it all has been explored to hell and back. That nothing is really all that unique anymore, and how the electronic realm of musical expression has been bastardized by formulaic nuances that we (apparently) can't get enough of......

I know in their recent collab, they talked about the challenge to produce something musical that is HIGHLY unexpected of the two artists in their own rights...

....Recently I've found a significant re-ignition of my passion for the world of warcraft

and thus has rendered the novelty of my love for music new again. It seems like that's what it takes to drive musical expression forward.

Was there a major point to my contribution to this particular thread???....maybe not, but it definitely addresses the focus and nuance novelty of where the "edm bubble" ebbs and flows.....
Soundcloud
Top

Wolfcry, I'm sorry but You're not very good at explaining stuff.
I didn't understand much of what you said. Do you talk about pitch or saturation/volume with your J curve?? then reverse the sample and do what? XD
Top

Hashkey wrote:Wolfcry, I'm sorry but You're not very good at explaining stuff.
I didn't understand much of what you said. Do you talk about pitch or saturation/volume with your J curve?? then reverse the sample and do what? XD

Its pretty detailed man. I don't know how much more detailed i can go. If some of it isn't making sense look up on google some of the vocabulary that i used.

Then u just cut the sound off before the initial "peak" of the volume. Then you use the same envelope to mod your original sample so that you don't have a we're floppy volume modulating drop but you still have the initial "wob" because of volume pitch.

Then you just do this across a spectrum of samples and do the handshake method to link em up.
A little tune of mine

^ What is the handshake method? Does it have something to do with adding crossfades to audio clips?

EDIT: Fuck me, realized there's wall of text above

im new here and i like reesey sounds lol... and i will share a bass i made today

^ Sounds pretty damn good, this thread is dead tho.
Top

bit of reese in this Soundcloud

I'm thinking it might be a fun idea to experiment with layering foley bits (fresh herbs) with a few detuned saws ( dry spices) and then maybe reversing them or something, if anyone is stuck in no-idea/ikea land.
Imo the only 'rule' of the reese nowadays is that it's a midheavy bass sound with some detuning so it either speeds up or skips a bit between the notes.